Throughout my adult life, the ones who know me for some time will tell you anytime I wanted to do something, I was always 100% in. My drive and passion means I can’t quit until I achieve whatever I set out to do. My biggest, almost crazy obsession with anything that swims started when I was young and I am constantly chasing my next biggest catch. Most recently, I’ve targeted an elusive fish – one with a beautiful coat of silver, a perfectly put together blend of elegance, grace, power, and strength. Can you guess? I’m talking about the silver king.. The Tarpon. 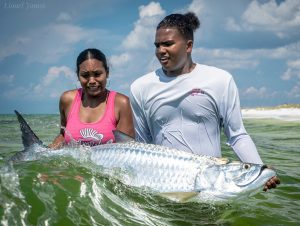 I finally made the catch of all catches this past summer and it didn’t disappoint. Tarpon is hard to hook; they fight hard and have crazy acrobatics. More often than not you don’t catch that fish, even after you hook it and fight it. You only have about a 37% chance of actually getting that fish to the boat and putting your hands on it, and that’s one of the many reasons why its a prize catch. 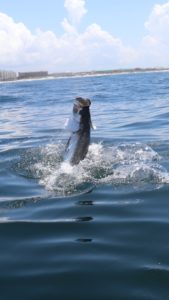 Tarpon can grow from 4-8ft and weigh up to 280lbs, another reason they can be so hard to catch. To put that in perspective, the average human adult male weighs 195lbs. Typically when you hook this fish, you’ll lose him in the first 2-10 seconds. If your tug of war makes it past the first 10 seconds, you’re about to be in for the fight of your life. One hour? Two hours? Who will quit first, you or the fish? While you tire by the second, a Tarpon rises to the surface and breathes a gulp of air – You read that right, a fish who can breathe air. They are obligate air breathers, which is why you see them rolling on the surface of the water and if they are not allowed to access the surface, they will die. That breathe of air gives the Tarpon a quick burst of energy to continue the fight. 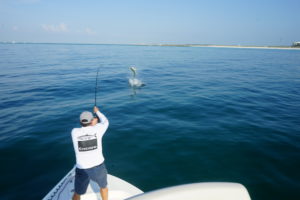 Fossil research shows that Tarpon have been swimming in our oceans since prehistoric times, meaning in this case, you’re actually fishing for a dinosaur. If you ever have had the opportunity of hooking and landing one, appreciate it. Indulge in the moment, take hundreds of photos, and stare at the beauty of this fish because it may only happen once in your lifetime. 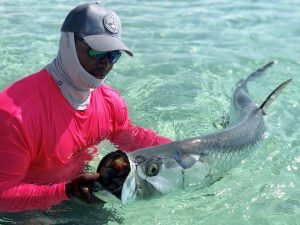 For me, catching something this big, monster-ish, almost dinosaur-ish fish, something happens to me. When I see that silver tip break the surface, my heart stops in anticipation, my brain frozen in awe – and this is how I know I have become addicted to this fish. 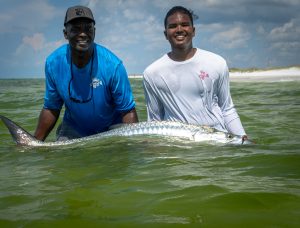 Destin Florida Tarpon Fishing is best from mid May to early August when schools of these fish are found migrating South through the Gulf of Mexico to spawn. Get yourself locked in with an angler that has Tarpon experience for your best chance to hook one up. Cost on Tarpon trips will vary, inquire for details. 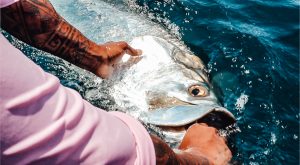